The Helios Centre has been an active participant in the debates surrounding the Muskrat Falls Project (the Lower Churchill Project) in Newfoundland and Labrador (NL) since 2008, when Philip Raphals was retained by Grand Riverkeeper, Labrador, to provide expert testimony in the upcoming Federal/Provincial Joint Review Panel hearings of what was then called the Lower Churchill Generation Project, composed of two hydroelectric projects downstream of Churchill Falls: Gull Island and Muskrat Falls.

As initially conceived, the project was to deliver power through Quebec to US markets. It was thus conceived of as a “merchant plant”, which would recover its investment costs through sales over the years on the open market.

However, in November 2010, the NL government announced a dramatic modification: Muskrat Falls would be developed first, along with two undersea DC transmission lines, first to the island of Newfoundland (the “Labrador-Island Link”, and then on to Nova Scotia (the “Maritime Link”).  No longer a merchant generation project, the primary goal now was to supply Newfoundland with power, allowing it to decomission the Holyrood Generating Station, an aging, expensive to operate and highly polluting power plant. The considerable amounts of excess power would be exported, over the Maritime Link.

In his brief to the JRP (LINK), Mr. Raphals pointed out the importance of this change of purpose, and emphasized that no careful study had been done to determine whether or not there were better solutions available to meet the Island’s needs. As the hearing progressed, he demonstrated that insufficient attention had been given to the Island’s enormous wind potential, or to the unexploited potential for energy efficiency savings (LINK). Further, while the proponent Nalcor claimed that the project would produce enormous financial benefits for the Project, he demonstrated that those benefits would in fact come from ratepayers, who would have no choice but to pay the very high costs of Muskrat Falls power (LINK).

The Panel report (https://www.ceaa.gc.ca/050/documents/53120/53120E.pdf) cast serious doubt on the project’s justification, and recommended that it not go ahead without an independent financial review and alternatives assessment. It concluded (p. 278):

If the financial review and alternatives assessments recommended by the Panel were to show that there are alternative ways of meeting the electricity demands of the Island over the medium term in a manner that is economically viable and environmentally and socially responsible, the Project should likely not be permitted to proceed for purposes of meeting Island demand. This is critical for the Muskrat Falls facility, because meeting Island demand has been put forward as its main justification.

Before this report was even issued, the provincial government mandated the NL Public Utilities Board (PUB) to review the project, but under strictly limited terms of reference, which excluded an possibility of seeking a better solution for meeting Island needs.  Mr. Raphals pointed this out in his testimony to the Board, and also drew attention the exceedingly high costs that Newfoundlanders would have to pay for Muskrat Falls power (LINK).

The provincial government nevertheless approved the project in 2012, and construction started in 2013 with a target commissioning date of 2017 and a target capital cost of $5.5 billion (including transmission investments).

Construction has not gone well.  Full commissioning is now scheduled for late 2021, with capital costs of over $13 billion.

In 2017, the NL government created a Commission of Inquiry to understand what went wrong.  Its report, entitled “Muskrat Falls: A Misguided Project” (LINK), was issued in March 2020 after hundreds of days of hearings.  Mr. Raphals appeared twice before the Commission as an expert witness, first with respect to the pre-sanction period (LINK), and then with respect to the Water Management Agreement (LINK). 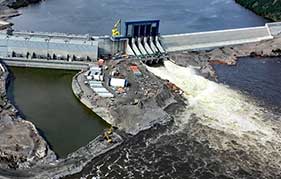 Comments on the Proposed Justification of the Lower Churchill Project

Comments on the Justification for the Labrador-Island Transmission Link

Muskrat Falls’ Contribution to the Reliability of the Island Interconnected System